Deprecated: array_key_exists(): Using array_key_exists() on objects is deprecated. Use isset() or property_exists() instead in /homepages/32/d620308429/htdocs/2018/web/app/plugins/timber-library/vendor/twig/twig/lib/Twig/Template.php on line 580

Deprecated: array_key_exists(): Using array_key_exists() on objects is deprecated. Use isset() or property_exists() instead in /homepages/32/d620308429/htdocs/2018/web/app/plugins/timber-library/vendor/twig/twig/lib/Twig/Template.php on line 580
The 10 Best Urban Night Scenes in Film

Deprecated: array_key_exists(): Using array_key_exists() on objects is deprecated. Use isset() or property_exists() instead in /homepages/32/d620308429/htdocs/2018/web/app/plugins/timber-library/vendor/twig/twig/lib/Twig/Template.php on line 580

Deprecated: array_key_exists(): Using array_key_exists() on objects is deprecated. Use isset() or property_exists() instead in /homepages/32/d620308429/htdocs/2018/web/app/plugins/timber-library/vendor/twig/twig/lib/Twig/Template.php on line 580
April 18, 2018


Art Night weaves a trail of nocturnal discovery in the city for one night each year. In the spirit of staying awake past bedtime, we take a look at some of the inspirational films that have perfectly captured the mystique of the streets after the sun goes down. 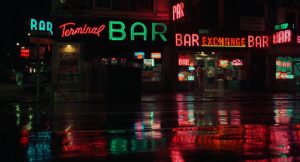 In this neon visual delight of a crime drama, an insomniac taxi driver played by Robert de Niro cruises the streets of night-time New York. The fixed camera shots of the illuminated city passing by have become iconic since the film’s release in 1976.

Victoria unfolds over one night in Berlin, when four local Berliners recruit an innocent accomplice to be their getaway driver. It’s a tale of the effervescence of youth that thrives at night in the incandescent spaces of nightclubs and artificially lit streets. The film is also a cinematographic feat, shot entirely in one take over the course of a suspenseful night. 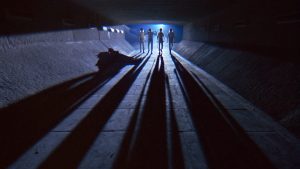 This 1971 classic from Stanley Kubrick caused controversy on its release, centering around a gang of delinquents who cause trouble under the cover of darkness in a dystopian near-future Britain. The ominous scenes, like the one pictured above, shot in an underpass below Wandsworth Bridge in London, play with light and shadow to a visually menacing effect.

Continuing in the dystopian vein, Blade Runner 2049 is an American neo-noir science fiction film awash with vibrant neon hues. Set thirty years after the first Blade Runner film, it takes place in a dystopian Los Angeles where a secret threatens to instigate a war.

Shot in Art Night 2018 territory, south of the river, we couldn’t leave Daphne off our list. We follow the film’s namesake, the fiery Daphne, in her often dysfunctional life. The film’s mesmerizing use of bird’s-eye-view camera shots capture the bustling vibrancy of London after dark and the inevitable loneliness that comes with living in a big city. 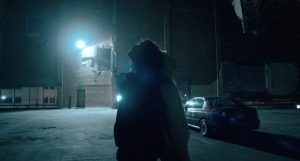 Somewhere between exhaustion-induced hysteria and dreaming comes Michal Marczak’s All These Sleepless Nights. A fiction/documentary hybrid, the lives of three young people in Warsaw become entangled in endless nights spent roaming the streets and seeking encounters from one party to the next. The night is a time of hedonistic abandon in Marczak’s portrayal.

This black and white thriller, the first feature film from Ana Lily Amirpour, takes place in the Iranian ghost-town ‘Bad City’. Breathtakingly haunting wide-angled shots reveal a worn-down city where men who disrespect women are hunted by a skateboarding vampire who rules the night. 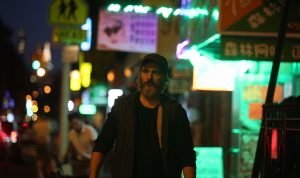 A beautifully brutal film, New York after dark has never been so striking as in You Were Never Really Here. The film tells the story of a killer’s quest for redemption against the backdrop of the nocturnal city.

Wong Kar-wai’s fantastical depiction of a futuristic Hong Kong centres on a science fiction writer. The film is a sensual overload of imagery that depicts the writer’s ability to blur fiction, reality, past and future. 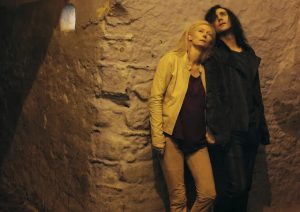 Jarmusch’s Only Lovers Left Alive is a vampire love story with crisp night time scenes, the stillness of which sends shivers down one’s spine. Most striking are the scenes shot in Tangier, Morocco where not even the warmer climate can break the ice of this cool couple who walk the cobbled and dimly lit alleys alone, pondering their place in modern society.